Posted: 2022-09-27 13:37:27
Thanks to Zoids Official we got to see our first product photos of the AZ-01 Blade Liger! This is certainly a cool development on the original Shield Liger. The kit was also on display at Takara Tomy's Hobby Expo, where people could stop by and take a look at some of their upcoming products. At this exhibit, the AZ Blade Liger was on display next to the original Tomy Blade Liger. Hobby Watch took a variety of photos of this exhibit.

Posted: 2022-09-07 04:02:12
Zoids Official has tweeted their first News Bulletin regarding the 40th Anniversary Project. To our incredible surprise, the announcement is the revival of the MPZ series! At least, of the frames and concept. These new kits, labeled under the "40th AZ-01 ~ 03" registration number are planned to begin in Autumn of this year (October, specifically.) The first video down below is the teaser posted on their account, which will begin the celebrations for the Zoids franchise's 40th anniversary!

The last MPZ kit released was the Saber Tiger, which was released in March 2016 for 14,040 yen retail. We can expect a moderate price increase due to the global situation. However, these "more realistic" kits are a unique reimagining of the original Tomy motorized series. A lot of insight went into their design, and I highly recommend looking at one of the videos for the series, which was posted in April 2015. It will be the second video below.

Posted: 2022-09-07 04:01:43
The first of the 40th Anniversary Zoids is the Blade Liger! Staying true to the video's announcement "The culmination of 40 years of Zoids - Evolved ligers are here now!!", the first of these kits will evolve the former Shield Liger design into this iconic Zoid. The Blade Liger looks robust on the Masterpiece frame, and is scheduled for October 2022. This will be the first kit using the MPZ frame to be released in years!

Posted: 2022-09-07 03:59:37
The second anniversary kit is, of course, the Liger Zero! With an all new design, this kit is scheduled for 2023. So far we've only got the wire frame look, but at first glance it appears to be using a highly modified version of the MPZ Shield Liger frame while remaining quite true to the original Liger Zero. Especially by MPZ standards. The MPZ-style caps will be a distinctive feature on this kit.

Posted: 2022-09-07 03:59:12
After well over a decade, the third kit will be the first-ever full size reimagining of the Murasame Liger! AZ-03 is scheduled for 2013, and sports an interesting aesthetic. With a much stronger MPZ influence the Murasame Liger will become even tankier than its initial 2000s release, which can be attributed to applying the Murasame Liger design over the MPZ Shield Liger frame. A detail I appreciate is being able to see the rotating caps through the ventilation gaps in the front of the Shoulder Armor.

This is just the start of the 40th Anniversary of Zoids. With the way the teaser video is set up, we have to wonder, will Wild Liger also get an MPZ treatment? Will we receive a rerelease of the MPZ Shield Liger as part of the celebrations? So far we have kits set up into 2023. There's a lot to ponder, and we're excited to move forward and see what Zoids has to offer!

Posted: 2022-08-31 22:13:46
It looks like Zoids Official has posted a rather intriguing promotional image, advertising the 40th anniversary of Zoids! This tantalizing teaser features a lineup of the Liger Zoids over the years. On closer look, they're customs of existing products, from HMM, to Genesis and Wild, and even the Hagane Works Blade Liger. The style closely mirrors the one used for the promotions of Zoids FOR, a former mobile game that received a lot of mixed feedback when it released following a hyper-realism image that bore little resemblance to the final game (even if it did get a really cool trailer.) That aside, the promotional artwork for FOR was gorgeous, and featured tons of realistic scenarios that we didn't often get to see. It's possible this teaser is even by the same group who handled the games' promo art, ANIMAREAL.

With this in mind, we're all wondering, what does it mean? It's certainly possible this artwork will reveal another game project. Product anniversaries are big in Japan, however, and even if this specific art doesn't lead to something that appeals to you, we'll likely see multiple announcements leading into the celebrations.

I'd also be remiss not to point out the absolutely beautiful logo, which is also the new profile pic of the Zoids Official Twitter. What an elegant design. As someone who got into Zoids during the CC/anime phase, I'm delighted to see that it features an anime-style Blade Liger.

Let's sit back and see where this goes! 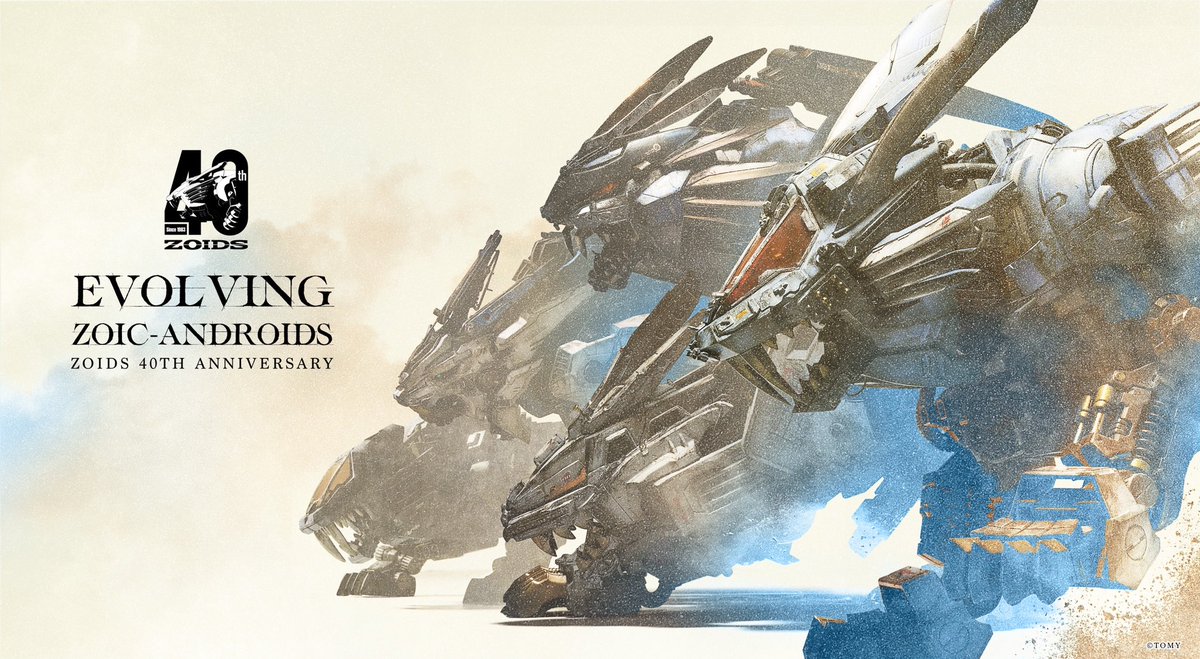